Ark (ARK) is a universal innovative platform designed to popularize and simplify as much as possible the processes of mutual relations, cooperation, and calculations in the virtual space. Ark has its own virtual sign-Ark token, which carries a monetary value.

Ark project was launched at the end of 2016. A huge team of 27 people is working on its launch and further promotion. Ark defines his mission as the proliferation of blockchain technologies among the broad masses of the population.

Note that Ark is not a traditional virtual currency. It is an entire ecosystem, a safe platform for adaptation. The company has ambitious plans: to stimulate the mass adoption of crypto money by offering those tools that will be useful and in demand by users. The new project has its own currency – ARK coin.

What is an Ark?

Ark (ARK) is a platform for consumer adoption. It is not just a cryptocurrency – it is an ecosystem meant for cryptocurrency mass adoption. Ark has a powerful core that allows transactions to take place with an eight-second block time. In addition, full decentralization is a distinctive feature of the project. Ark is also working to ensure anonymity[1].

Features Ark does not end there. The project also uses its own Smart Bridge technology, which allows Ark to communicate with other blockchain technologies.

In addition, a large number of tools from this project are being developed, the purpose of which will be to distribute not only its own cryptocurrency but also digital money in General.

To explain more easily than good Ark, we list its advantages:

To be honest, these disadvantages apply not only to Ark but also to other cryptocurrencies.

As already mentioned, the development of this project involved a huge team – 27 professionals in the field of blockchain technologies, most of which were previously involved in the creation of large-scale projects.

Among the experts who created Ark – Francois Xavier, who has long held the position of chief programmer e-currency Lisk, and now manages the Department of development Ark. Also joined the team of professionals who previously engaged in the development of infrastructure network Bitshares.

The price of ARK token is always chaining, however, BitcoinWiki gives you a chance to see the prices online on Coin360 widget.

ARK coin is available on the following exchanges:

Experts working on the development of the project suggest that its further improvement will allow the platform to provide users with such features:

It should be noted that everything that is done by the Ark project team is done with a single goal – to create a single system that combines a variety of services and tools. If they succeed, the company's support and high liquidity of ark cryptocurrencies are provided. 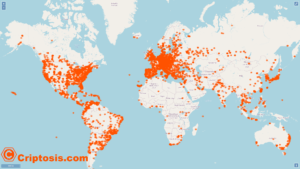